The UESPWiki – Your source for The Elder Scrolls since 1995
< Bloodmoon: People / Merchants
Jump to: navigation, search 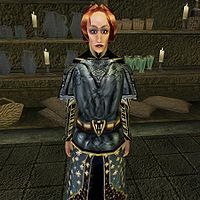 Alcedonia Amnis is an Imperial publican located in the bar of Raven Rock. She is an East Empire Company steward and sells sundries and potions, though they may cost you a fortune. Aside from her natural charm and ability to absorb fatigue from others, she knows no spells.

She is wearing an expensive shirt with matching skirt and shoes, and is wielding a silver war axe.

"Greetings, %PCName. We've got beds and we've got food. Either of those interest you?"

"Very well. Head upstairs, to the last room on the right. It's yours for the next day." (You pay 10 gold) (Disposition up by 2)

Once you have started Bar Brawl, you can ask Amnis about the disruptive patron:

"I cut him off a while ago, but he hasn't calmed down. Something's got to be done; it's ruining what little business I have."

If you persuade Favelnim to stop fighting:

"So he's going to knock it off, huh? Good. But he's still not getting any more drinks from me."

If you simply kill Favelnim:

"Was that really necessary? Now I'll have to mop the floor, and it still probably won't get the stains out..."

Once the quest is completed and resolved either way:

"The matter's been settled; don't waste any more thought on it."