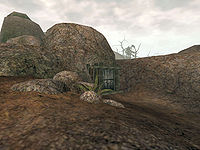 Assarnud is a cave just to the east of Gnisis.

This cave is home to a gang of four slavers. It has two entrances: one is on the waterside of the lake, the other is literally just around the corner from Fort Darius, passing eastward through the fort's arch and then turning north. This second entrance leads directly into the slave pens, from which every exit is protected by traps and locks: as if that were not secure enough, one of the slavers - a large, burly Orc with an Orcish battle axe - is also inside the pen, on guard. There are six slaves here, who can be freed with the key the Orc is carrying.

Of interest - if not of any actual value - is an underwater skeleton in one of the pools, with a fishing pole and an intact potion of Water Breathing beside him. Unfortunately, the ability to breathe water does not protect from slaughterfish - he would have been better off carrying a weapon than a potion.

There is not a great deal of loot in this cave, most of it is random and will consist of weapons, armor, clothes, jewelry, moon sugar and skooma. Also, there is a diamond vein at the bottom of one of the pools of water (near some kollops) and a few diamonds can be harvested there. 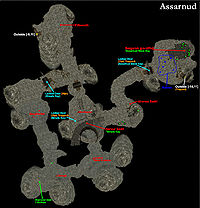