The UESPWiki – Your source for The Elder Scrolls since 1995
< Shivering Isles: Places: Inns
Jump to: navigation, search 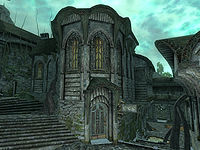 Sickly Bernice's Taphouse is an inn on the southern side of Crucible, the demented half of New Sheoth. It is located across the street from Hirrus Clutumnus' house and right next to Muurine's house.

The publican, Sickly Bernice, has 5 gold and a Mercantile skill of 44. When bartering, she will buy potions and food while only selling the latter. She is a hypochondriac and believes she will die any second, a fact that amuses the population of Crucible to no end. Despite her terminal illness, Bernice finds time to distill her very own brand of wine, which comes in three vintages: Bernice's Alley Wine, Bernice's Roofwater Wine and Bernice's Summer Wine.

The taphouse is a rather large, grand inn and would probably look elegant if Bernice's hypochondria left more time for housekeeping. As it is, cobwebs festoon the corners of the room, crumpled paper is scattered around the floor, and the building appears shabby and run-down from both the interior and exterior. The bar area is spacious, although it only contains two tables with some food, and is stocked with several bottles of her own wine. A short flight of stairs divides the bar from an area of open space that in many establishments would be used as a dance floor. Here, apart from a threadbare rug, the only use is to store crates and barrels.

The Guest Rooms area of the inn contains a large landing and three double rooms, all of which have their own private dining area, and one of which is available for rent at 20 gold per night. The room reserved for you is the first one on the right and it is spacious and as messy as the taproom downstairs. More crumpled paper can be found laying on the floor, some parchments and skulls are placed on a table and the only refreshment is a bottle of cheap wine.