The UESPWiki – Your source for The Elder Scrolls since 1995
< Online: Places: Eastmarch / Inns
Jump to: navigation, search 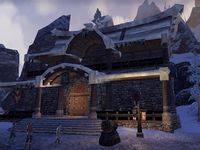 The Sober Nord Tavern is a two-story Nord-style building and one of two inns in Windhelm. It is located in the northwestern part of the city, near Windhelm Bank. The inn has a tavern on the ground floor and guest rooms upstairs. The tavern occupies most of the lower floor while a small storage room can be found on the left-hand side. A cooking fire is situated across from the entrance. A bard, Arani Longhair, plays the lute here, beside the fireplace. There is one bookshelf in the tavern and three more upstairs. Another cooking fire can be found on the upper floor. There are two rooms here furnished with three beds, two nightstands, two desks and a wardrobe. Kireth and Raynor Vanos can be encountered in the first guest room. The inn has a balcony which can be accessed from the top floor; there is nothing remarkable there, however, except for the view.

This Online-related article is a stub. You can help by expanding it.
Retrieved from "https://en.uesp.net/w/index.php?title=Online:The_Sober_Nord_Tavern&oldid=2004082"
Categories:
Hidden categories: