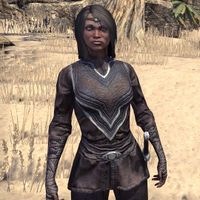 She will stand outside Sep's Spine waiting for any potential assistants:

"You look like you're at loose ends. Interested in making some money?"
What do you mean?
"The boss hired a matchmaker named Ashtad to find a groom for his daughter, and he sent me out here to recruit someone.
He says he'll pay well. He's up at our camp now. Can you help? I've been out here long enough."
You want me to marry your boss's daughter?
"No! You'll help Ashtad. The boss suspended hostilities for the wedding. No one will attack you.
And if you take the job, tell that matchmaker to call me in. This is no work for a certified cutthroat. Go on. Through the tunnel and up the hill."
Very well. I'll talk to Ashtad, the matchmaker.

If spoken to before heading into the camp, she'll say:

"The matchmaker's interesting. He could sell scales to an Argonian, if you ask me."

After the dowry has been placed, she'll appear suddenly in a puff of smoke and yell "There you are, you swindler!" and attack you.